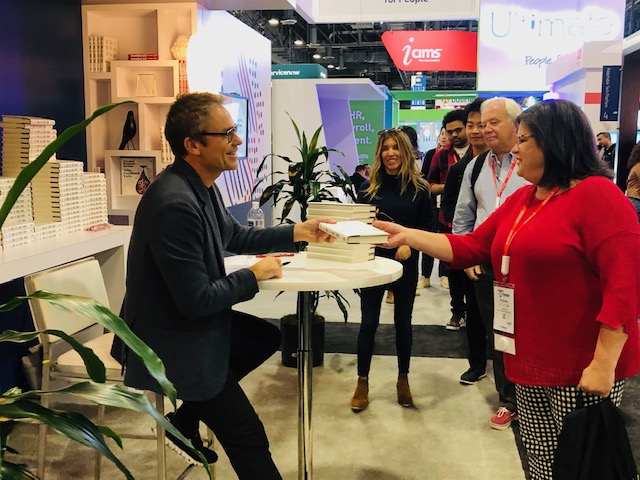 How do I know I’m at an HR conference? I know when I hear Marcus Buckingham giving a keynote speech.

To put it another way, if Josh Bersin is everyone’s favorite HR technology analyst, Buckingham may be America’s most familiar HR conference speaker. I base this on the fact that I’ve heard him speak at all manner of talent management conferences and events over the past 15 years, and that’s because of two things:

Authors need places to market their writing. HR conferences are great for that. There’s nothing wrong with this approach because lots of writers (think Daniel Pink and Malcolm Gladwell) have used keynotes at events like HR Tech to tout their latest missive and pontificate on it’s premise.

In other words, it’s not a big surprise to see Buckingham leading off the second full day of the annual HR Technology Conference & Exhibition in Las Vegas with a talk about the key insights from his latest book, the provocatively titled Nine Lies About Work.

3 of Buckingham’s “Lies” about work

I won’t detail all of Buckingham’s “Nine Lies” here because you need to read the book to get the real insights, but here are three of those “lies” from the title that should give you a feel for where he’s going with this:

Intrigued? You should be, because Buckingham’s roots are in research — he worked for two decades as a senior researcher at Gallup — so his books and conference presentations are always chock full of data that support his latest talent insights.

That 85 percent figure is a scary one, because it says that after 10 plus years of focus and hundreds of million of dollars in spending, employee engagement hasn’t improved much at all.

The biggest driver of engagement today

Buckingham had another research and data driven insight into what he found to be the biggest driver of workforce engagement today, and it’s pretty simple.

According to the research, 17 percent of workers who are on teams are fully engaged, while engagement falls into the single digits — 8 percent — for those who are NOT working on a team.

Even though the 17 percent number for engagement from teamwork isn’t anything to get too excited over, it is still the biggest driver of engagement — and more than double that of workers not on teams — that Buckingham found in his research.

I’m not sure what to make of that except that teamwork really matters if you’re serious about engagement.

Unfortunately, most companies don’t measure or manage teamwork very well. Virtually all work is about teamwork, Buckingham noted, but nobody seems to be focusing on teams. He noted that Google doesn’t know how many teams it has or who is on them, but that’s not a slam on Google because nobody else really knows that either.

This was really good stuff, and Buckingham did it in an all-too-brief 30 minutes. If I had one piece of advice for HR Technology Conference Chair Steve Boese, it’s that he needs to give Marcus Buckingham a longer time slot the next time he keynotes at the HR Tech because he was probably the most interesting thing on the entire conference program.

As much as I really liked Josh Bersin’s keynote Wednesday, I think Buckingham’s talk had a broader and more specific appeal.

Waiting for Godot, or Nine Lies About Work

This is a bit surprising: Even though most authors use conference presentations to help sell their books, it was impossible to buy a copy of Nine Lies About Work at the 2019 HR Tech conference.

The reason? It’s because it was given away for free.

ADP had a large booth at the very front of the Exhibit Hall where you could get a free copy of Nine Lies About Work personally signed by Marcus Buckingham as long as you were willing to do one thing — stand in a long, slow-moving, Disneyland-like line to get it.

Yes, ADP bought a lot of copies of Nine Lies About Work to give out after Buckingham’s speech as long as you were patiently willing to stand in a line that wrapped all the way around and through the ADP booth to get it. If you could do that, you got the free book and were good to go.

My wait in line was about 40 minutes … and I got there about 5 minutes after the Exhibit Hall opened. Attendees who arrived later undoubtedly had more time to ponder the time-value proposition of their decision to go to a technology conference and end up standing around for a free book.

Lots of people walked by the line, and a number of them wondered what we were waiting for. I wanted to tell them “toilet paper,” but I didn’t because I wasn’t sure how many Millennials and Gen Z attendees would get the reference and Soviet Era humor.

Still, getting a free Marcus Buckingham book personally signed by the Big Man himself is pretty sweet.

Who says you don’t get good deals in Las Vegas anymore? Well, sometimes you do if you attend HR Tech.