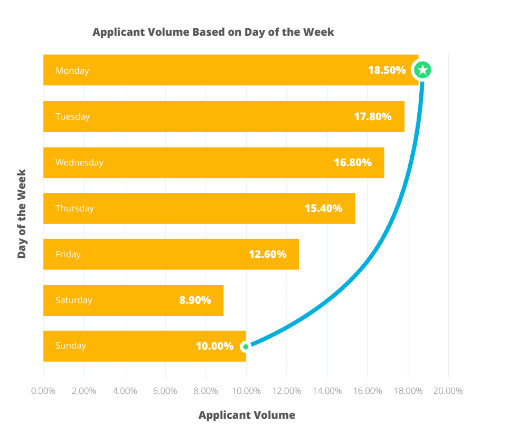 It’s a blocking and tackling-type of a question in talent acquisition and recruiting, right? Most of us believe it’s part science and part art. “Well, Tim, that all depends on…”

It depends on data and the Appcast data from their 2019 Recruitment Media Benchmark Report says this:

Does this mean you should only post your jobs on Monday to get the most bang for your buck? Hmm. Great question (I just asked myself)! The data would say yes, but you really have to test this with your own jobs and marketplace.

Also, there are Monday’s you would never post because it’s a holiday or some other calendar factor that doesn’t give you the best opportunity for traffic.

It’s probably clear that when that hiring manager is begging for you to post the job on Friday, “to get a head start on next week” you tell them to shut up and do their job, and you’ll do yours! For the most part, you’re going to post jobs Monday – Wednesday and stay away from the end of the week and weekends, as a broad policy.

I remember my Mom (she started the company I run now) telling me early on in my career that you should always fire someone on a Monday, not a Friday. “If you fire them on Monday, they take the rest of the week looking for their next job. If you fire them on Friday, they sit at home all weekend and get depressed, angry, drunk, all of the above!”

Now she said this based on zero data, but a lot of experience firing people and believing the Monday fires were better, and now when I see the data about how many people apply on Mondays it makes me wonder if everyone was like my Mom and fires people on Mondays!

I like the data from Appcast. It’s a robust amount so you can’t question the accuracy of when people like to apply to jobs, and it passes the ‘eye-test’ of feeling about right. I think all of us want to believe people spend their weekends applying to jobs, but the reality is most people like to get paid to apply to jobs while they’re working!