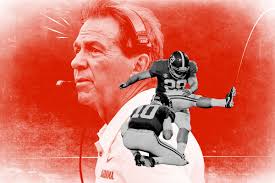 Being a manager is full of things that are simple, yet hard.

Emoting confidence in the team when your gut tells you otherwise is an important skill. You’re a poker player, and you show 100 different “tells” on your face, in your emails and in the way you greet people. Keep in mind that anyone struggling with performance likely knows it to some extent, which means they’re reading the tea leaves with every interaction they have with you – the leader, the manager, their lifeline for confidence.

Do you believe? It’s a fair question.

This is on my mind for a sports reason – at the University of Alabama, there’s a football program that is historically good lead by a coach named Nick Saban. They’re good in every area of the game except one – kicking.

Kickers go to Alabama to die. There’s something about the program that sucks confidence out of kickers and makes them wilt. Check out this tweet for a historic chart of Alabama’s kicking performance vs the field in college football – it’s staggering, especially once you dig in and realize that Alabama almost always has it’s pick of top kicking talent to recruit.

Once they come to the Crimson Tide, not only do they not lead the nation, they’re below average.

What’s up? It all comes back to the culture that’s built for talent that needs confidence to perform. Here’s some examples of how managers rob talent of confidence in corporate America:

1–The Sales Manager that smells weakness in a new sales rep, so he fails to release the rep to do their own demos, which means they never get the confidence to perform on that stage.

2–The CFO who has a couple of average experiences with a Sr. Financial Analyst, so she stops taking the FA to the Ops meeting or anywhere where the FA could hurt her.

3–The HR Director that gets a couple of complaints from a client group peer about one of her direct report HR Managers. As a result, she buries the HR Manager in a client group with low expectations.

The question when someone struggles on your team is always WHAT COMES NEXT? Who are you as a coach? If you’re in HR or Recruiting, what do you expect out of the managers in your company?

What should come next is coaching. How can you help? After working with the person, you have to expect some struggles, but you’ve got to show belief that they can do the job in question – even when they struggle.

Celebrating the small improvements is important as well.

What comes next when you have good or great talent that struggles? Do you go into grumbling mode, or do you get side by side with that talent and connect and try to lift them up?

At Alabama, there’s a history of grumbling about kickers, which generally guarantees that #### is going to go sideways in the future.

When you grumble or fail to engage talent that’s struggling in a positive way, you are locking in future failure. You and your managers are better than that.

Grumbling and disengaging leads to future failure. See the video below on how that occasional works out at Alabama with kickers (email subscribers click through if you don’t see the video below).